Trying another way to fight the spam

I have turned off the comment moderation option. Instead I turned on word verification feature. Now everyone who is human (according to Blogger's humanness test, at least) can comment in this blog.

Update 20 minutes later: I've just received a spam comment inviting me to buy some cigarettes or whatever. Unfortunately, I have to turn comment moderation back on.
1 comment:

I've obtained the permission to publish some shots from DA* 50-135/2.8 zoom. Here they are. Notably, the second one was not processed in any way whatsoever - only downsized for web publication. The first one was slightly cropped and tone corrected. 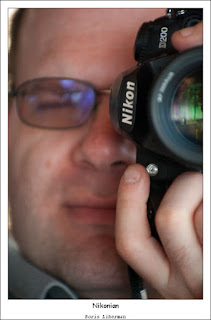 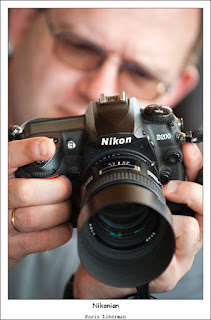 Generally, I feel very reluctant to write anything about photo gear in my blog. From time to time I would buy a new lens or another photo gear item, but it is almost improbable to stumble upon something rare and/or unique that would be worth dedicating a special page to that. I've some other ideas in mind when it comes to writing about photo gear, but this time I think I should put (notice, not write) few words on the subject in my blog.

I am reading Luminous Landscape for a number of years now. I just like this site. The most recent review of Canon EOS 5DMkII by Nick Devlin is just brilliant. Bloody brilliant as some would say. I'd like to list just a number of quotes that I wholeheartedly agree with.

"...since Canon is still putting a “Direct Print” button on a 21MP full-frame camera, I can only assume that real photographers are in short supply in the design and specification departments."

The following quote is something one must always keep in mind. I used bold to put emphasis on very important notion, at least in my opinion.

"In commercial print reproduction, a Canon G10 now pumps out more than enough pixels for a double-truck layout. Printed on inkjet or photographic paper, images from just about any higher-end DSLR will look great up to 11x14. It is only in the rarified air of really, really big prints, done with really, really good post-processing, on really, really well profiled systems that the differences we are speaking of will be visible.

To some extent, we are all quibbling about the price of champagne in the promised land, and we should remember that."

And finally, the topping of the cream, so to say:

"Switching between Canon, Sony and Nikon’s top-end offerings will improve nothing but your relationship with your camera dealer."
No comments:

I met two lenses today. A friend of mine came from the United States. He brought a whole bag of Pentax gear, but most interesting for me were DA* 16-50/2.8 and DA* 50-135/2.8 lenses. The first one is very good, but just that - very good. The second one is quite remarkable. The SDM motor is absolutely silent but I couldn't say if it is faster or in any other way better than old screwdriver system. Though it works absolutely fine with my K10D. Enough talking.

Him, two of his brothers (notably Nikonians) and myself went to Caesaria park today. So here is a sequence of few shots.

I approached the spot I thought could be used to show the strong waves that were there. I had been basically certain that I am far from the reach of salty water. 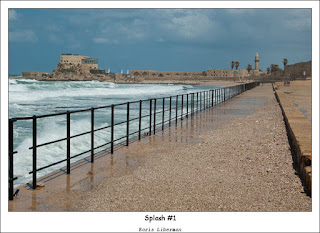 Then, some 15 seconds later the wave came. This and two shots that follow were taken within 2 seconds. 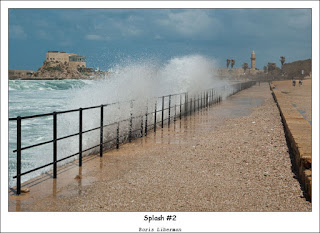 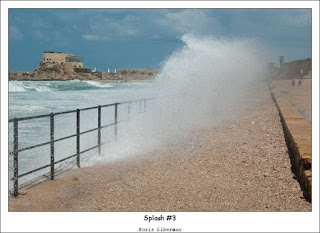 At this moment all my left side was soaking wet and salty. 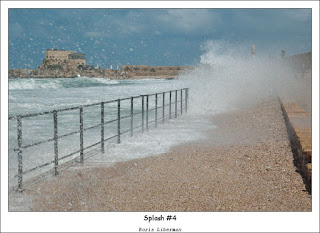 So I finally chickened and ran away. After a brief wipe with the piece of cloth both the camera and the lens were just like before - no signs of being splashed with the Mediterranean waters.

I used DA* 50-135/2.8 to take some portraits so that I am going to have to obtain permission to publish these shots before I put them here.

I have missed an opportunity to photograph almond blooms this year. Mimosas however are blooming at full strength and I have a proper "weapon" against them - my FA 100/3.5 macro lens. 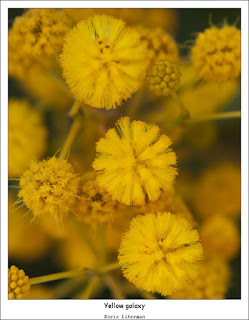 Anat has grown up enough to exercise holding up her head. For 3 months old it's quite an effort. At the end Anat got tired. 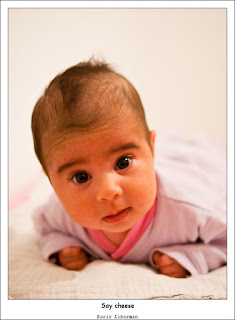 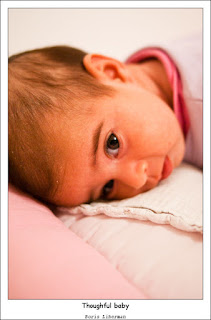 Hello, my name is Boris and I suffer from the LBA. For a long time I wanted to have a macro lens of my own. I even used to have one. Not long ago, actually quite recently, I finally bought Pentax SMC FA 100/3.5 lens. This is exactly what I wanted - a simple, yet reasonably good answer to cover macro stuff. So here I am, offering you a couple of etudes I shot today. 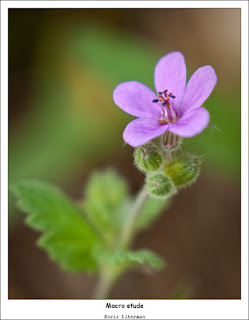 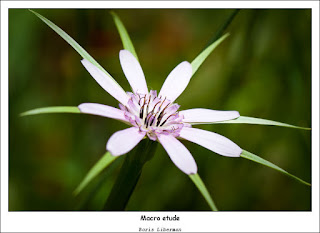 As a matter of fact I bought a whole bunch of stuff, but this will be attended to in a different post.

To be continued...
2 comments:

We did again! Well, we had breakfast in the Max Brenner's restaurant in Tel Aviv. And then we had a quiet walk along Rothschild boulevard. 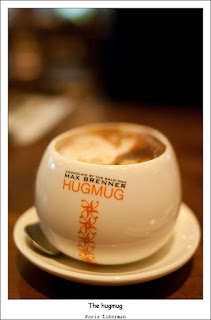 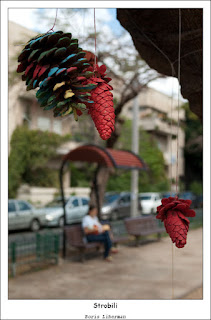 On workflow and archiving

My friend Jostein is writing a series of articles about (digital photographer's) workflow and archiving. I'd like to attend to his most recent blog entry that, as he says, "is step to the side" from the series.

I must admit that although I am using Adobe Photoshop Lightroom since the late beta stages, I did not bother with the keywording until quite recently. Admittedly this is not a wise thing, as Lightroom is pretty powerful (at least IMO) in this regard, but it occurrs to me now that it has a direct connection with the way the archiving and organizing fused in my workflow.

So here is my workflow (described loosely in the same style as Jostein describes his):

1. Take the pictures (well, otherwise Jostein and I wouldn't be friends now...)
2. Load them to the computer.
3. Immediately organize as follows:
a. The folder is renamed to yyyy-mm-dd.
b. Files are renamed to IGPxxxxx.PEF as opposed to _IGPxxxx.PEF produced by the camera. (I don't expect to wrap around at 100,000 exposures with my camera, but your shutter count may vary from that of mine.)
c. Initially I store all these new folders and files in a folder called "K10D". It is because Pentax K10D is presently the camera I use.
4. Load to LightRoom which is done simply by "syncrhonizing the folder" K10D.

From this point on it is varying. The following very loosely ordered steps usually take place.
1. I go over the images once and mark with one-star rating all image I think I might want to post-process further. Also I delete the obviously bad images.
2. This step usually happens at least one day and in fact more often several days to one week afterwards. I go over the images again and correct the one-star ratings ever so slightly. Usually I would post-process some (or all, depending on their number) of the rated images and give them more precise ratings.

Next, the following happens from time to time, really depending on my time allowance:
1. Whenever I decide to post an image to the web (say, my blog here) and give it a proper key word.
2. Using Lightroom I may move the directories around and about on the hard drive. The final directory structure is tree like:
Family Album/Year/Month/Date/*.pef
Travel/Tel Aviv/Date/*.pef, etc.

When I prepare a printable full size JPG I usually place it in the same directory where its original RAW (pef for Pentax) is. On the other hand, the web size images are stored separately and they are not imported to the Lightroom catalog.

Usually during this stage I assign various keywords to the images. However, I haven't yet completely figured what kind of benefit I want to extract from the keywording. The premise "the more keywords is the better" does not cut it for me - inevitably I will get confused and loose valuable information if I come up with too many keywords. This is in fact, why the series of articles that Jostein is writing is so interesting to me.

Finally, the backup strategy:
1. All the image files are stored on a Linux server that has RAID1 (mirror) disk array. Therefore, immediately after the files are copies from the memory card(s) to the computer, they get protected.
2. Once a week Lightroom create a backup copy of its catalog on the above Linux server.
3. Usually once a week I perform an unscheduled backup of my image files to the net attached external hard drive.

I realize that this workflow can be improved. Notably, I should at least endevour to describe it in less words. However, it is offered here as yet another view on the problem presented by Jostein. And of course, I am allowed to produce a textual entry in my photo blog every now and then, am I not?
2 comments:

Few weeks ago I've posted few shots from a new location that we recently found for ourselves to have a peaceful weekend walk. Today were returned to the same spot again, though the weather was almost as unusual as during our previous visit. Today it was +33C during the midday - quite a spring, if you ask me, even by local measure. 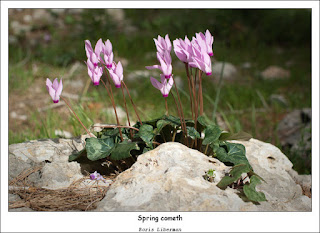 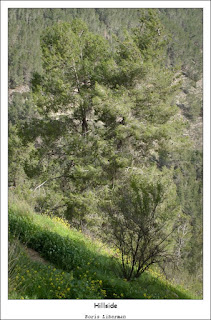 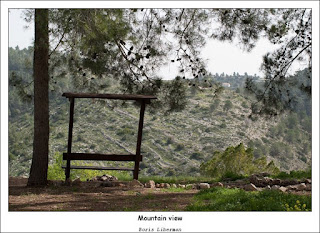 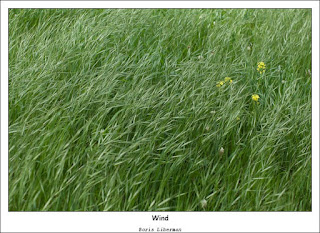 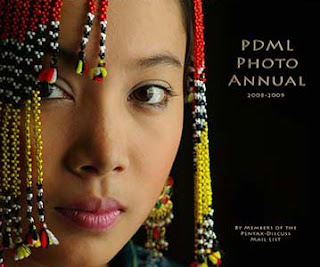 Click on the above picture for the official Pdml Photo Annual web-site.
It has started as a wild suggestion by one of the club members. As it turned out it was absolutely sane and perfectly wonderful idea. Some days ago I've received three copies of my own of this wonderful work of art.

I wholeheartedly suggest that you grab a copy while you still can.

P.S. Shameless plug - two of my photographs are in the book as well.
P.P.S. The above photo is published with the permission of Mark Roberts, a.ka. The Editor.