I have small hands with rather long fingers, thus the hand grip of K-7 is comfortable to me. So, mechanically, so to say, K-7 is just fine. The user interface is totally different matter.
To summarize - nothing is broken, but the changes from K10D are so significant that certain learning period is inevitable.

I always had a hard time aligning my verticals and horizontals. Now, it seems, I've been given a tool to ease my burden. Some people reported that the electronic level of their cameras was consistently off the mark by 1 degree or so. That's just fine by me. As long as I can get my straight lines aligned consistently, I will be a happy camper. Really useful add-on by Pentax.

Either my camera is defective or else, but AF in LV mode is awfully slow. It gets there eventually. Eventually being major key word here. What LV seems to be good for is manual focusing of my SMCP A 50/1.2 lens. It is because you can have middle of the frame enlarged for fine focusing. Until I get a Katz Eye focusing screen, it could be a reasonable stop gap solution.

Additionally, the LV button is placed in such a way that it is quite easy to click it when moving your finger so as to change AF mode. Certain additional care is in order.

I've shot a short video of my daughters playing. But I've done it in portrait orientation. It was hilarious.

However, shooting passing cars on Ayalon freeway in 720p mode resulted in some jerky motion of the cars, probably because they were moving too fast thanks to absence of traffic jams.

Evidently, the video mode of K-7 can be used (and will be used by me) with great success, but it is not a fully fledged video camera. Though, it has never proclaimed to be one.

Nonetheless, I should admit that video mode of K-7 is truly a new toy for me. I still wonder what kind of results can be achieved by shooting with SMCP A 50/1.2 at f1.2 or f1.4 after fall of darkness...
No comments:

I think it is time I wrote a review of my own on my new camera, so here goes. Be warned that I am a wordy person...

Perhaps it would be a good idea to write few words about me. Especially so, if it is your first visit to this blog and you arrived here by googling "Pentax K-7 review" or some such.

I am an amateur photographer, meaning that I do it or fun, not for profit. Occasionally and may be even accidentally a photo or two of mine would be published in local camera club calendar or somewhere on the net. I have tried myself in a small number of competitions, but that yielded nothing.

I have shot Pentax since 2002. I have shot Pentax digital since late 2004. All together I shot just a whisker less than 10K frames with *istD, a tad more than 20K frames with K10D (bought just before 2006 ended) and now I have K-7. My main lenses are three FA limiteds and DA 21 limited, which probably says more about my income than about my abilities as a photographer, but who knows - perhaps you wanted to know which lenses get mounted on my camera bodies.

I should say that I don't do brick wall/resolution target/etc testing. For a number of reasons. First, it makes little sense as I don't have more than one sample of either camera of lens, so it has no statistical merit. Second - I just dislike it. Thus, what I am going to say below it based on my usual shooting, not anything special.

By the way, don't expect a formal review. There are going to be a number of so called official reviews of K-7 on the net. Instead here I am going to try to write down my own opinion of this camera based solely and only on my shooting experience and habits or style.

Just in case if you like it straight to the point. Pentax K-7 is an excellent camera but it may require quite a learning curve. Also, though really good, the hype and all the rumors that preceded it are much much more than it really deserves. No, Pentax K-7 is not bigger than life, it is just yet another camera from a second tier (Canon and Nikon being the first) major manufacturer.

The best thing is that now it has 100% coverage. So you get what you see, literally. No more guessing what else is going to be in the frame. The not so good thing is that glass wearer such as myself (-6 diopters in each eye) still cannot easily or reliably perform manual focusing with the stock focusing screen.

I will have to buy Katz Eye split focusing screen like I did for my K10D.

Finally Pentax came up with the camera that is quiet. Likely releasing the shutter now is going to attract far less attention than it did with K10D.

When I get a chance to try 1/8000 sec shutter speed, I'd probably just post a picture.

In my view it does not really matter how the shutter speed and aperture values were determined. So I use matrix metering for 99.9% of my shots.

My specific K-7 sample has quirky or worse yet unreliable metering. Outdoors it is just fine. Indoors it tends to underexpose by 0.7-1.0 Ev. No big deal as it offers -5.0 through +5.0 Ev exposure compensation range. However it means that I am going to keep chimping just like I did with good old K10D. My K10D however has more consistent metering. And if it errs, it is usually by 0.3 Ev, far less often by 0.7 Ev and I cannot recall full 1.0 Ev mistakes.

The fact that K-7 underexposes indoors is even more annoying as the shadow noise is more likely to be more prominent in this case.

Yes, new Safox VIII+ system is not all that good as it is said to be. At least not on my camera.

Again, outdoors and at far distances - no problems whatsoever. It is also quite faster than K10D's AF outdoors as well as indoors. But, indoors it is still imprecise. It seems more sensitive too. E.g. if I set it to use only center sensor, focus, move the camera ever so slightly and focus again, it feels it and refocuses. Yet, I had to dial in some focus correction for my FA 31 limited and with FA 77 limited its focus precision is inconsistent - sometimes it focuses wrong.

Again, buying Katz Eye screen would resolve this issue, but sans focusing speed, which is improved, it gives me no advantages over K10D.

Yes, I tried K-7's AF in some rather dark situations and it focused where K10D would probably give up. However, even with FA 43 limited which so far has been most consistent precision wise, when there is not enough light, it would simply misfocus.

Admittedly I haven't figured out when the green focus assist light is supposed to come for the rescue, as I saw it few times, but I don't yet understand what are the exact conditions for it to kick in.
1 comment:

Another reason for my silence here is that right after I returned from the (business) trip to USA, my new camera arrived. Naturally, it is Pentax K-7, probably the most hyped, rumored and discussed camera of the few recent months. Mine seems to be a good copy, within reasonable tolerances though admittedly it did not click with me right away like K10D did some 2.5+ years ago. I should be writing more about K-7 later on, as I familiarize myself with the plenitude of its abilities, options, features, etc.

Meanwhile, Galia inherited (as per early agreement) my K10D. Here is she doing something her father does all too often. 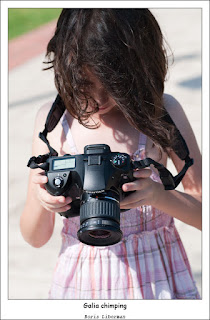 There's been a period of silence on this blog. It is partly because I had a business trip to Maryland/DC area. There I was given an opportunity to spend a weekend with my friends. 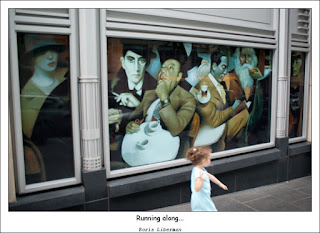 You can find more photos from that wonderful weekend after this link.
2 comments: